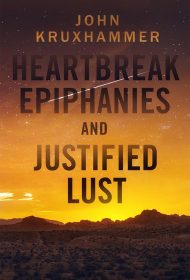 The story opens in a brothel. There the client, a john named John, requests, instead of sex, to be read aloud from his own manuscript. “We’re not here for that,” says the first girl who refuses him; “That’s a new one,” says the second before pressing the emergency button to summon help.

After pausing for a vaguely connected discussion of cosmological terms and a dash of freshman philosophy, the narrative gets going, fueled by great quantities of beer and sexual encounters, often of the passing sort and always from the male perspective. This landscape of booze and broads is traversed by a pair of odd characters. John Palmer is driven to institutionalized madness by hatred of his wealthy parents and into a fantasy world by an obsession for his beautiful therapist, while John Morgan, an auditor for the federal government, finds refuge from a squalid marriage in alcohol and rock music.

Miraculously cured by the death of his parents in a car crash, leaving him the sole heir to $12 million, Palmer repairs to Las Vegas to fulfill hedonistic fantasies assisted by a philosophy-professor-turned-sexologist “researching” the practices and motives of escorts, a task naturally requiring close observation. Eventually, they meet up with Morgan on a break from his well-paying job, and together embark on a series of escapades involving quantities of wine, women and song. Despite the trio’s many sordid adventures, however, the novel’s real central character is Las Vegas itself, “city of dreams at the end of all journeys.”

The story presents many challenges: sudden shifts between time, place, mood and characters, frequent diversions, and what appear to be narrative dead ends. For many readers, this will be too daunting to navigate. Those willing to persevere, however, might find themselves intrigued by the author’s love of language, bizarre plot twists and flights into fantasy.