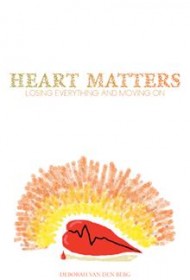 Over a 2-1/2-year span, Deborah Van Den Berg’s mother died, she was divorced, she became estranged from her two brothers and she retired after 28 years of working at an automotive company. Heart Matters is her story of dealing — or trying to deal — with these changes.

Most of the book is a recounting of recent setbacks. As she discusses them, she also reveals parts of her past: the three marriages, the childhood sexual abuse at the hands of her father, a pregnancy at age 15. Clearly, Van Den Berg has faced challenges, though some of them seem to be the result of her own impulsiveness and bad decisions.

Much of the narrative has the feel of a good old ax-grinding, especially toward her family. Her mother, with whom she seems to have had a love-hate relationship, is a frequent target. Her brothers also come under fire, as do their wives and families, who learned to hate her from her siblings, she says.

But she says she hasn’t written Heart Matters to complain about her lot in life or seek sympathy from the readers. Her goal is to show how she has survived.
She tells the reader she now sees what caused people’s behavior and is able to forgive them all — her family, her abusive husbands, the counselors who have failed her. Still, the reader has to wonder. Although she says she has forgiven her family, she notes that she still isn’t on speaking terms with them. The impulsive behavior evident throughout the book shows up again on the last page, when Van Den Berg says she is selling her house and relocating, “but not sure where.”

If nothing else, Heart Matters seems to have helped Van Den Berg get a better picture of who she is, and why. So for her, at least, the book is a valuable tool. For general readers, however, its benefits may be limited.