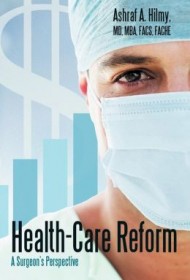 In Health-Care Reform: A Surgeon’s Perspective, Dr. Ashraf Hilmy takes a provocative look at the problems inherent in the U.S. healthcare delivery system. Using carefully annotated references, Hilmy compares the U.S. with that of other developed countries and demonstrates how it comes up short.

According to the book, Hilmy has been practicing since 1979 and is board certified in surgery, anesthesiology, critical-care medicine and health-care administration. He holds an MBA from the University of Texas, Pan Am.

With a surgeon’s precision, he zeroes in on our medical and economic inefficiencies, detailing the litigiousness, medical and insurance incompetence, over-testing and lack of access that drives up medical costs. For example, lack of insurance coverage to pay for medications not only leads to life-threatening diabetic complications for one patient, but also results in massive taxpayer costs. In other examples, over-testing adds to cost, not better patient outcomes. Hilmy’s observational scalpel also hovers over patient culpability, including a morbidly obese woman infested with maggots, who only sought care when she was unable to change TV channels!

The surgeon then shares his recommendations for realistic healthcare reform. He argues that integrating medical group practices can create economy of scale and valuable data sharing. He recommends rewarding medical quality and efficiency and providing incentives to avoid unnecessary testing and other cost drivers. Other solutions he proposes include meaningful tort reform and physician accountability driven by evidence-based medicine. Finally, he adds a chapter that cogently explains The Affordable Care Act (“Obama Care”).

Written in a conversational style that can be blunt (as when noting that VA physicians are “more likely to be lazy and less driven”), the book will no doubt stir up some controversy. Still, the author believes that better healthcare policy can be achieved by doctors, lawyers, insurance company representatives, lawmakers and public officials all working together. Readers who share his desire to improve U.S. healthcare will find Health-Care Reform a stimulating way to begin that dialogue.