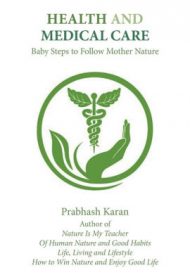 The fifth in a series of books dedicated to improving lives through discovery of the beauty and wisdom of Mother Nature, this title focuses on health—mostly physical but also mental.

Prabhash Karan, an engineer, offers brief discussions of a plethora of medical issues, from autism and bulimia to heart attacks, cholesterol, kidney disease, sexual problems and more. The author also includes chapters devoted specifically to women, children and men. For example, in the women’s health chapter, Karan briefly acknowledges the physical differences in strength between genders, and points out female health advantages in immunity, social networks and less risky behaviors—then continues with topics like pregnancy and sexuality.

The author’s wellness philosophy is embodied in the quote from Thomas More that introduces the “Medical Care” chapter: “It is a wise man’s part, rather to avoid sickness than to wish for medicines.” Karan lauds the accomplishments of allopathic (modern mainstream) medicine, but also emphasizes homeopathic medicine (the belief that the body cures itself with natural remedies), plus Ayurveda medicine (an ancient Indian holistic philosophy).

Although an ambitious undertaking, the volume suffers from several flaws. On the minor side, the author oddly lists tables of contents for his entire series here, and readers seeking specific topics will wish they had an index to consult. More significantly, Karan often fails to cite his sources, instead referring vaguely to “one study” or making bold statements without support, such as: “Girls are at higher risk for the toxic effects of social media than boys are”; or: “A chaotic lifestyle could be a cause for the pattern of bad behavior typifying ADHD…”

Given the lack of source citations, readers should approach this book with a healthy skepticism and, in fact, may prefer to choose from the many other more carefully vetted options available.