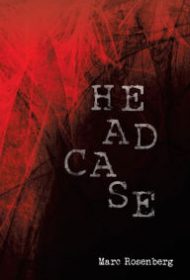 When it comes to suspense novels, what’s your preference: continual break-neck action or a steady drip of details that builds a suspenseful momentum? Headcase offers both – effectively creating a sense of dread that keeps readers turning pages.

Headcase’s characters are all damaged souls, and in Marc Rosenberg’s skillful hands, how they meet against the backdrop of a serial killer on the loose is really the stuff of film noir. Rosenberg couples an exceptional ear for compelling dialogue with a refined visual sense that brings his scenes to life.

The tale begins on a sour note: Detective-with-something-to-prove Ash Aiken is stewing about his latest unfortunate encounter with the criminal element in a liquor store robbery gone bad. He’s a mess, but that’s nothing compared to the messy tangle of clues he soon tries to unravel as he starts tracking the serial killer.

Along the way, a slew of characters make that task something just short of a Herculean effort. Not to mention that Aiken’s also hell bent to get closure in his personal life: He’s hired a private investigator to sniff out his wife and son, who cut out on Aiken earlier. And the PI’s got his own ghosts, complicating matters greatly. Add a femme fatale on the lookout for her mark and you’ve got a full-blown cast of dysfunctional characters who keep the provocative banter going strong.

And provocative it is. The author doesn’t skimp on scatological references. Those who have a low threshold for such things will balk at the sheer volume of profanity used by Headcase’s characters. Still, there’s a bit of genius to describing a suspect as “Jumpy as a poodle shitting razor blades.”
While some will prefer less characters to follow, readers who like their thrillers jam-packed with colorful personalities won’t be disappointed. Nor will mystery lovers who appreciate a plot that moves unpredictably to its denouement. For these readers, Headcase should surely fill the bill.