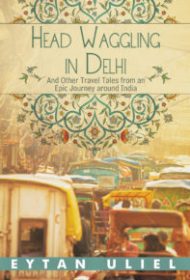 Great travel writers practice alchemy: synthesizing the sights, sounds and smells of their travels into a transcendent reading experience. Eytan Uliel showcases such skill in this memoir, Head Waggling in Delhi.

Uliel employs irony, humor, and humility to highlight the experiences of he and his girlfriend during their college days, backpacking throughout India in the mid-‘90s. Their adventure begins with a journey to Varanasi and continues to Darjeeling, Calcutta, Madras, Bangalore, and New Delhi. The title refers to the custom of head waggling that Uliel sees as a unique identifier of Indian culture: a physical gesture that punctuates conversations, sometimes to amplify it, other times to add irony to the tasks at hand.

Uliel constructs compelling descriptions of various destinations. But he’s is at his best when focusing on the couple’s often-exasperating challenges involving the country’s complexities. He skillfully captures the cadence and cacophony of dialects, and readers will easily be pulled into Uliel’s stories, such as their Gorakhpur Railway Station ticket-buying nightmare when every attempt to secure seats on the train to Varanasi was met with duplicity from the railway staff.

Generally, the author appears to relish the dichotomy of an India populace that seems to welcome tourists while also providing roadblocks to discourage them. But he’s clear-eyed about the stark realities of privilege that live alongside extreme poverty in Calcutta: “Hollywood had wanted me to believe that among Calcutta’s street people I would find noble souls triumphing against the odds…” he writes. “But when walking the real streets of Calcutta, I got to see for myself…how Western pop culture had chosen to romanticize what was, in reality, unmitigated human suffering.”

The author can be wordy; some crisp editing would have improved the book overall. And for readers who prefer a deep-dive into historical references, the book may come up short. But anyone who enjoys mixing a lighter dose of history with first-hand stories will find this is a literary masala worth the tasting.