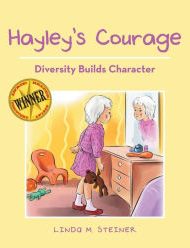 Hayley is a happy child with a red birthmark on one side of her face. Taught by her parents that she’s just as good as anyone else—and, in fact, special for being different–Hayley is a model of confidence as she responds to a boy’s unpleasant comments in a supermarket, and to another boy at school, Cole, who soon becomes her friend. When Cole has an allergic reaction to Halloween makeup, causing a red rash on his face, other children make fun of Cole—until Hayley defends him.

Hayley’s Courage is an inspiring story, although some might question the ease with which Hayley convinces children to be more considerate of others who look different. Similarly, the book’s ending seems a bit jarring. Steiner writes that “Cole and Hayley learned a valuable lesson that day. Through their own courage, they each gained a new friend” — but Cole and Hayley are depicted playing together and “becoming friends” much earlier in the book.

Despite these quibbles, Steiner’s writing is clear and compelling, and Hayley’s self-assurance in addressing those who are mean to her makes her an ideal role model. Hayley’s Courage is based on Steiner’s own daughter Hayley, and the book includes a foreword describing Sturge-Weber syndrome, a rare disorder characterized by a congenital facial birthmark; an epilogue offers details about the real Hayley’s life. The author encourages parents, however, to use the book with children who have “any illness or physical or mental challenge.”

The illustrations, by Leo Latti, are well-executed, and the book is handsomely produced, with thick, glossy paper stock. There’s a misspelling of “foreword” as “forward,” but as Hayley’s story demonstrates, a minor blemish doesn’t diminish the beauty of what’s inside. Hayley’s Courage may be useful in classroom libraries as a valuable tool in discussing differences, and more importantly, similarities.