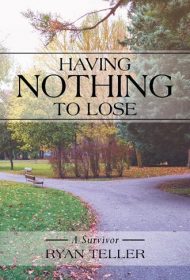 In Having Nothing to Lose, Ryan Teller offers a detailed memoir of his long struggle with abuse and addiction.

The author’s boyhood seemed placid early on, but as time passed, his stepfather’s alcoholism mutated into violence and cruelty. As punishment, for example, he would force Teller and his sister to sit in a bathtub of freezing water until, at last, Teller would confess to things he hadn’t done to stop the agony. Later, Teller was beaten with an axe handle, among other incidents.

Around age 16, he began developing a taste for alcohol, marijuana and nicotine and later left home to avoid the abuse. He frequently moved, impelled by job losses and a sense of adventure. At times, he contemplated suicide. Eventually, he was arrested for illegal drug use and spent time at a treatment facility, where he learned more about his mental illness, opening his life to the possibility of recovery.

Teller has a prodigious memory and recounts in detail his childhood’s innocent victimhood and his increasing defiance as he sank into substance abuse. Sometimes, those details are too copious and mundane, however, slowing momentum. For example: “It is now late June 1985, and I am still working at the seafood restaurant and another waiter has been hired. He works on the weekends and on my days off, usually Monday and Tuesday. During the week it is generally not busy. I work by myself. The weekends are better and 2 of us are needed, [sic] it is busier than the rest of the week…”

The text also contains copyediting errors, such as missing words and incorrect punctuation.

The author’s ready wit and frank revelations make the book flow, nonetheless. And Teller inspires as he battles family issues, society’s norms, and finally himself, to gain a sense of peace.

A thorough edit would improve this book, but readers who have experienced similar issues, or observed them in loved ones, could find hope here.