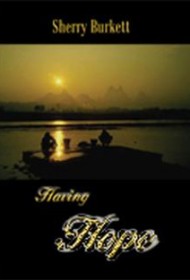 Sherry Burkett’s Having Hope is a satisfying novel of complex love relationships with a soupcon of suspense.

A few years back, Hope Logan’s young daughter was killed in a car accident while Hope was driving. In response, her husband, Charles has frozen her out of his life, hardly coming home and never seeking intimacy. To ease her pain, Hope has gained 70 pounds. At an event, Hope meets Tim Richardson, a man who has recently lost his wife. She instantly picks up on his sorrow, and he notes that he is thinking of moving back home, where his sister and Hope live in Perrysberg, Ohio.

Flash forward 15 months. Hope has slimmed down; her self-esteem is back. Tim moves back and through a series of accidental encounters, they form an intense friendship.

Meanwhile, Charles is still out of reach and flirting with his secretary, Heather. At work, he is being set up to fail by his superior, a man named Thompson known to rifle through employees’ files behind their backs. To throw him off, Heather plants misinformation in a file on Charles’ desk. Something in the file causes Thompson to have a stroke. The suspense of the file’s contents and who put it there runs parallel to the resolution of the relationships at the book’s heart.

The book could have used a substantial trim. We don’t need to know exactly what people are purchasing, what time they plan to leave for an outing, etc. In addition, some incidents lack credibility. (Women in the library are so knocked out by Tim’s looks that they stand in a group at the window to watch him.) But the repartee is enjoyable, and we identify with the characters as they navigate through life’s difficulties.

Though not quite there yet, the author shows great promise. Readers of women’s fiction such as Barbara Delinsky and Danielle Steel should keep their eye on this one.