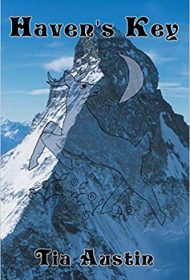 Tia Austin’s compelling fantasy Haven’s Key relies just as much on human relationships as it does mystical creatures, ancient magic and faraway settings.

The basic narrative structure behind Austin’s earnest and charming first entry in the Haven series will be familiar to fantasy fans: A group of heroes embark on a seemingly impossible quest, with the fate of the known world hanging in the balance. Here, however, Austin relies on thoughtful character development to make the story come alive.

Austin’s band of six heroes are supremely relatable. Ovard, the wise guardian; Jair, the 12-year-old whose strange face markings hold the key to a new world; Tassie, a young woman whose deafness doesn’t impede her status as a healer and a hero; Leandra and Arden, warriors pledged to defend their fellow members – all tout human depth in lieu of mystical powers.

This quality is most striking in Brace, the troupe’s sixth and last member to join. A longtime thief running from the law, Brace encounters the other five in the untamed, hostile stretches of the “wild lands” outside of the realm of Dunya, and begins traveling with them.

The world as the protagonists know it is rapidly falling prey to a prophesized disappearance of light, and, in essence, goodness. The fabled land of Haven — “city of light in this darkening world,” a “place of miracles” — is their only escape, and the only way to the lost city lies in the strange markings on Jair’s face and predictions spelled out in texts held by Ovard.

Austin includes plenty of fantastical twists and turns: The group runs across mythical monsters, some loosed by the growing darkness, and travel across a land with its own unique inhabitants, mythology and ruins. Yet the engaging, well-wrought human characters are the highlight.

Hardcore fantasy fans may want more scenes of magic, mayhem and monsters, but those who appreciate solid fiction will surely enjoy the relatable story Austin spins.