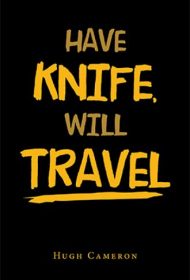 While they don’t perform before adoring fans, some surgeons nevertheless attain rock star status. As a pioneer in the world of orthopedic surgery and the development of artificial joints, Hugh Cameron traveled the world and took great notes along the way. Have Knife, Will Travel is a fast-moving, frisky memoir of medicine as it was practiced in a bygone era, with less regulation and more room for improvisation and fraternization.

Cameron writes like he’s telling war stories among friends over a few pints, describing his early years in a small Scottish village and the schooling that led him to orthopedics. Once established in the field, he combined his medical and bioengineering studies to focus on improving the duration of artificial joints, especially knees and hips, which originally functioned for seven years before wearing out. The work kept him in airport lounges and lecture halls, then gowned and scrubbed for surgery.

He describes how working at Toronto General led him to London for further training, and an instance in which he performed the same obscure, difficult foot operation three times in one day to master the technique.

Two minor changes could make this book even better. A bit more context and explanation in sections describing operations would help lay readers more closely follow what’s happening. Sentences like “The femur is subluxed laterally on top of the tibia” can be hard to envision. More important, Cameron peppers the book with negative views about government oversight, the FDA, the concept of participation trophies and so forth. It’s clear from the book as a whole that he’s self-aware and reflective, but these rants leave behind a bitter taste.

Overall, though, Have Knife, Will Travel offers an intimate tour of places most of us will never see, including some inside the human body.