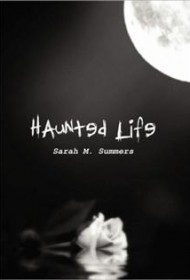 In this witty novel by author and college student Sarah M. Summers, a teenage girl tracks down a serial killer with the help of a geeky friend, a ghost sidekick and a werespider.

Seventeen-year-old Ceria and her twin sister Lucia have been helping ghosts move on to the hereafter ever since their father died and became the ruler of the gateway to the afterlife. They’ve also been raised by a werewolf, Maura, the leader of her pack, and watched over by ghosts sent by their father.

But now, Lucia is in the hospital following a mysterious attack, and Ceria has to solve a crime without her sister. A serial killer has strangled five teen girls in Southport, Virginia, and one of the ghosts of those girls has asked Ceria to stop him from killing again. Luckily, Ceria has the help of her computer-savvy friend Evrin (the editor of the school paper), her ghost guardian Az and werespider Cipher, who shifts between human and spider forms.

Along the way, Ceria will have to confront a stalking vampire, try to figure out who injured her sister and deal with two werewolf brothers. One of them is making slobbery advances and the other is her obstinate bodyguard. She’ll also try to make sense of a terrifying vision she’s having in her sleep.

Though serial murders aren’t light fare, the story never feels dark, in part because some of the murdered girls return as ghosts and details of the crimes are minimal. Summers has a gift for dialogue, especially teen banter, and the story is tight, fast-paced and engaging. Unfortunately, syntax errors, as well as verb disagreement, especially in the beginning, may frustrate readers. But this is an easy fix. With a good edit, the story is sure to have an enthusiastic fan base.