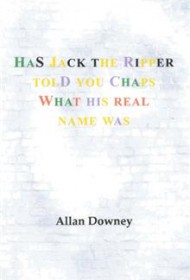 During the 1880s, quite a few London prostitutes became murder victims. It appeared that a serial killer committed at least six of the murders. But if such a serial killer indeed existed, he never did prison time for the crimes associated with his name.

When Allan Downey published his thin book in 2010 about the killer eventually dubbed “Jack the Ripper,” previous authors had identified the killer as a painter named Walter Richard Sickert. The most prominent was novelist/true crime writer Patricia Cornwell, who published Portrait of a Killer: Jack the Ripper–Case Closed during 2002.

After reading Cornwell’s book–which many reviewers found trustworthy and many did not–Downey began analyzing messages and letters left behind by the person known as Jack the Ripper. Using various cryptographic techniques, the author believes he has confirmed Cornwell’s identification of Sickert as the killer, and has given new meaning to Sickert’s messages.

The cryptographic explanations offered by Downey are extremely difficult to follow. As for their reliability and validity, it is perhaps impossible to make a conclusive judgment. Downey’s proof might be nothing more than randomness mixed with wishful thinking.

Downey also presents as fact what might be mistaken suppositions. For example, the author bases some of his evidence on the assumption that Sickert read Dostoevsky’s Crime and Punishment, then presented cryptographic messages based on that novel’s passages. Even if Sickert had read the novel, there are many translated versions. In his monograph, Downey writes: “I have a Heron Books copy of the original translation, and this is the translation that Sickert would have read.” Downey never says how he knows which translation Sickert read; If Sickert read a different translation, Downey’s cryptographic technique is almost surely invalid.

In sum, this book is recommended only for readers already obsessed with Jack the Ripper’s identity, and/or cryptographers who want to critique Downey’s formulas.