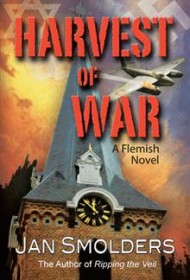 Harvest of War: A Flemish Novel is a fast-paced WWII historical novel that dramatically illustrates how war can transform ordinary citizens into heroes and villains alike.

The novel, set in Ramsel, a German-occupied town 30 miles southeast of Antwerp, Belgium, begins in 1944. Rationing, censorship, clashes between resistance groups and collaborators, abductions, and the increasing volatility of the Nazi’s secret police have taken their toll on the townsfolk. More than anyone, protagonist Dr. Bruno Van Dam, a widower and father of teenagers Eric and Monique, exists in the middle of the conflict. He grants medical care to both friend and foe and is Ramsel’s chief problem solver.

An onslaught of events obliges Van Dam to maneuver between both sides to seek justice and freedom. His decisions to hide an orphaned Jewish boy, treat and protect two British pilots injured in a plane crash, and negotiate with Franz Ehrlich, leader of the secret police, for information when Eric is kidnapped force him to carry “an explosive load … of dangerous secrets”—the revelation of which would end the doctor’s life.

Despite the use of contemporary American vocabulary such as “dude,” “thrown me under the bus,” and “retard” and a conclusion that feels rushed, Harvest of War is a compelling read.  It vividly portrays the growing distrust among its diverse and believable characters as word spreads that liberation is near and reprisals for treason are imminent. Its setting allows for an uncommon World War II story, and its references to the friction between Belgium’s Flemish and Francophone communities is a historical perspective readers seldom encounter.

Ultimately, the novel explores human endurance in wartime, and well-crafted descriptions such as the following hit home: “[Frau Bauer’s] long breaks within sentences told her story better than her whispered comments about life under Hitler. Pale, graying, and slow, she was a picture of the destitution that war had wrought.”