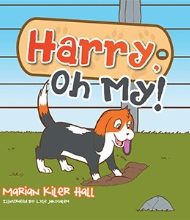 Harry, Oh My! is a sequel to Hall’s book Harry, My Dog. Like that book, it centers around the basset hound that belongs to the author’s friends. The book offers three short stories, each delivered in rhyme: “Harry the Digger,” “Harry, The Model,” and “Harry Goodbye.”

In the first, Harry is obsessed with digging a hole until neighbor Valerie becomes concerned that Harry will hurt himself and follows another neighbor’s advice to block the hole and distract Harry with a treat. “Harry, The Model” tracks the narrator’s efforts to paint a picture of Harry during his restful moments, and “Harry Goodbye” provides a recap of the narrator’s 10-day visit (which apparently encompasses the time frame of the other two stories) and shows her leaving from the bus station.

These episodes have a playful feel, but the text is often strained and unclear. For example, the opening lines of “Harry Goodbye” read: “I surprised Valerie. “This is for you.”/ And gave her the painting. ‘I knew'” [sic]. It’s unclear what ‘I knew’ refers to and who is speaking those words.
Additionally, the author’s references can be puzzling; in “Harry, The Model,” Hall writes: “Three days I saw a spectacular sight:/ Zebra, a butterfly, danced in the light.” How does the narrator know this butterfly’s name? Are they friends? There’s no explanation provided.
The book’s illustrations might have illuminated such points, but more often, they contribute to the confusion. For example, there’s nothing in the opening pages that explains who the narrator is and her relation to Harry. Two women are pictured, but with three characters —a narrator and two others—it’s never clear who’s who.

Such issues detract greatly from the book’s entertainment value. While children may appreciate the bold illustrations in Harry, Oh My!, the narrative requires revision to satisfy an audience.