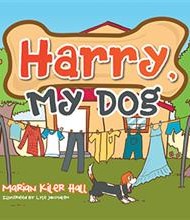 The narrator is introduced to Harry, a former stray, while visiting her friends Valerie and Roger. Hall relates how the couple found Harry, took him in, cleaned him up, and set up an electric fence in the yard for him. She relates the things Harry loves to do, including running around the yard and rolling in the grass, and details the day Harry wanders near their pool and falls in, but manages to swim to safety. The story concludes with the end of the author’s visit as she says goodbye to her friends and Harry.

The book’s title is a bit confusing, as Harry is clearly not the narrator’s dog. But Hall tells the story briskly and with playful use of end rhyme throughout, as when Valerie and Roger decide on a name for their newly adopted dog: “He must have a name. “What do you say?”/ “Let’s call him Harry.” [sic] “Yes, Harry’s OK.” Occasionally, the text deviates from this pattern and falls flat by comparison: “Harry, the Swimmer, a happy dog is he,/Black and tan and white, a Basset Hound.”

The book’s illustrations are lively, if generic, and serve as a valuable aid to the storytelling. They deliver several fun moments, such as the multi-page sequence in which Harry runs near the pool, falls in, and then shakes himself dry. However, the suspense would have been better conveyed with an ellipsis following the text on these “cliff-hanger” pages, instead of incorrectly placed periods, as written. One page ends: “How awful, one day, for before he could think.” The next begins: “He fell in the pool.”

Despite the book’s flaws, Harry proves a lovable character, and young children, who don’t care much about punctuation or the occasional flat rhyme, should enjoy this short, sweet story.