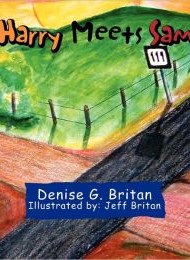 While riding a school bus for the first time, a six-year-old boy runs into bullies and makes a friend in this sweet but slow-paced picture book that, unfortunately, offers nothing new in the heavily visited premise about starting school.

First grader Harry lives at the end of a country road and can’t wait for school to start so he can ride a yellow bus. But when the big day comes, the bus is noisy, and older boys snag his backpack and toss it around. Fortunately, a middle-school girl, Heidi, grabs the backpack away and passes it back to Harry. Soon, Harry and Heidi’s brother Sam, also a first grader, are sitting together on the bus telling each other all about their families.

In class, the boys sit next to each other, and Harry notices that Sam doesn’t have a backpack. It’s Harry’s turn to come to the rescue and, without a blink, he shares his crayons and lunch, sealing their friendship.

Author Denise Britan nicely speaks to her young audience. In one cute scene, she describes a preschool girl holding up three fingers to Harry to show her age. She also shares the exciting little things a child notices the first time on a bus, such as how the bus stops at railroad tracks and the driver looks from side to side. However, the storyline is nothing new, and the illustrations look like drafts. (Among other issues, Harry wears dark glasses that make him look slick and too mature.)

Though good-hearted, this back-to-school offering doesn’t set itself apart from the pack.