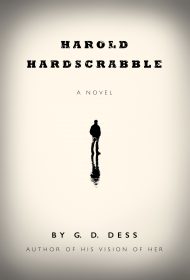 G.D. Dess’s novel, which takes its name from its protagonist, follows Harold Hardscrabble’s downward trajectory from his early college years through the decades that follow.

The story begins as Harold meets and becomes involved with fellow student Carol. He describes her as “controlling” and the opposite of his placid, peaceful character: “brash, energetic and volatile.”  Nonetheless, Harold finds ways to overlook these traits and the two have soon “forged that vast entanglement of habits and shared emotional experiences that comprises a loving relationship.”

They marry and continue their pursuit of advanced degrees. But where Harold fancies himself an artist, disinclined to living a life that involves chasing money, Carol can’t climb the corporate ladder fast enough. Despite all, the two find themselves living successful lives. There are promotions, children, a move to the ‘burbs—but one problem: Harold isn’t happy. His dissatisfaction with life reveals itself early and forebodes a darkening future that plays out as the novel unwinds.

Harold Hardscrabble is smartly written, informed by the philosophies and ideas of various documents and writers, including Karl Marx, David Foster Wallace and Noam Chomsky. Harold’s plight of feeling “compromised as a person” is well articulated and makes him a sympathetic character, albeit one who doesn’t seem to truly seek happiness. Meanwhile, Carol comes across as smug and selfish, but unapologetically so.

The plot is well-drawn, if somewhat sluggish, particularly early on, and requires patience to allow Dess to build the case for Harold’s growing disenchantment. As Harold ages, he faces many unpleasant events. But while most people would confront such darker moments, regroup and move on, for Harold they tend to serve as one more bit of fuel awaiting only the final spark. When it comes, it’s hardly surprising.

Ultimately, while Harold Hardscrabble can be an uneven read, it is ultimately compelling. It’s most likely to appeal to readers who came of age in the 1970s, as well as those who share a certain disenchantment with the contemporary world.