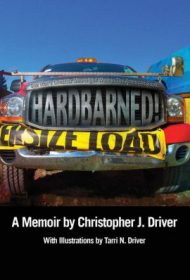 Christopher Driver’s darkly comic memoir is dedicated to “the worldwide legion of workers who trudge through unsatisfying jobs,” a cross-section of humanity with which he is closely aligned.

An aspiring writer with a master’s degree, Driver’s applications for writing positions netted nary a nibble. Instead, he spent three years delivering and repossessing portable storage barns in the Southeast, a gig that capped a quarter-century of unsatisfying work, including stints as a dishwasher, house painter, nightclub valet, warehouse worker, grocery cashier, and bikini store clerk. His experiences as a barn-hauler “with a steadily building berserker rage” dominate his memoir, much as they did his working life.

Barn-hauling, he writes, “made me angrier than anything I’d ever experienced. … I felt trapped and was truly challenged to examine what was important to me in regards to both work and life itself.”

Driver’s prose, while engaging, is sometimes overblown, as in this account of a stubborn mother and son who insisted their barn be installed on the side of a cliff: “I discovered quickly that I was up against a thinly disguised brick wall of relentless inflexibility coupled with an undeniable lack of ability or simple refusal to recognize the reality of the physics on the ground, but bless my heart, this inarguable fact was delivered with the syrupy sheen of southern gentility, a two-faced and disgusting strategy.”

Fewer accounts of barn deliveries gone wrong—and the technical details that went along with them—might enable readers to appreciate Driver’s fatigue without actually experiencing it. Still, his insights about the nature of work – the seduction of money and security vs. the tedium of marginal employment – are hard-won and will be illuminating for those who have wanted to “take this job and shove it.”