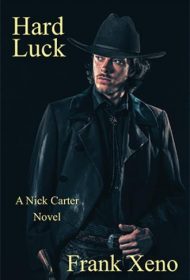 After a short prelude, the story opens with Sheriff Nick Carter surveying a murder scene. The victim has been shot and left with a bottle of bleach beside her; officials later learn the killer used this to clean the victim from the inside out. Instead of his normal medical examiner showing up, Nick is greeted by Kathy Fisher, the mayor’s niece, who will act as the stand-in examiner.

Although thrown by her presence, Nick accepts Kathy’s help at the insistence of Kathy’s aunt, who plays matchmaker between the pair; Kathy has had a crush on Carter since she was a pre-teen.

Nick hires Kathy to assist him in the investigation. Upon further examination of the body, they find a heart-shaped tattoo on the victim’s inner thigh. This sparks Nick’s memory of a cold case his father investigated before his passing: the murder of another Native American girl with the same tattoo. This puts Nick on the trail of a serial killer named Paul Murphy (an alias).

The author offers Murphy’s intriguing perspective, explaining the motives behind the murders and their effects on him. Murphy’s mother, whom he also murdered, haunts him, foretelling an ominous fate: death by the hands of Nick Carter.

As Nick and Kathy follow the killer’s path, readers will enjoy the couple’s playful, developing relationship and Kathy’s humor, particularly when she finds herself in jeopardizing situations with criminals. For example, she gets knocked out by a prostitute who doesn’t like waking up in jail and injured when a criminal runs into a pole she has been holding onto while clinging to his back, trying to stop him from committing a crime.

The mystery is solved too quickly, and the text contains problems, such as missing words and inappropriate punctuation. Still, readers should appreciate the characters and the novel’s satisfying conclusion.