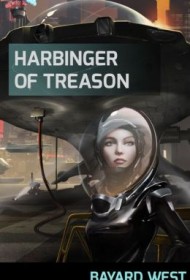 As the story opens, we learn that Cassandra “Cassie” Hague’s father is admiral of the space fleet for the Sol Alliance, an interplanetary government that includes the human civilizations on Earth and Mars. Meanwhile, her mother serves as ambassador to the Consortian Republic, a colony of humans who broke ties with Earth and formed their own government on the planet Consortia. This leaves Cassie caught in the middle as tensions between the two governments escalate to dangerous levels.

At the center of it all is Dakota Simms, a civilian contractor originally from Consortia who essentially defected to the Sol Alliance to continue his work creating revolutionary battleship technology. Consortian conspirators have evidently tampered with Dakota’s headmods (implants that offer network connectivity and the ability to project thoughts to others) and planted self-destructing malware that will kill him in less than two months. With the launch of the starship boasting his advances just weeks away, the only way for Dakota to survive is to steal the spaceship and take it to Consortia.

But Cassie thinks she can save the life of her budding love interest while keeping the tech out of enemy hands. All she has to do is hijack the ship and take Dakota to a genius living at the edge of colonized space who can presumably can fix the malware problem.

While somewhat derivative, this story is action-packed, fast-paced, intelligently plotted and features an undeniably endearing heroine; it’s solid science fiction through and through. SF fans should be aware, however, that the mind-blowing cliffhanger at novel’s end will leave them pulling their hair out waiting for the sequel.