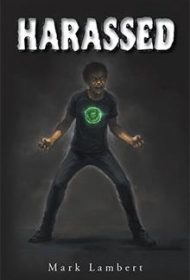 The plot of Mark Lambert’s debut novel, Harassed, revolves around a demon who is harassing a trio of innocents in 1972 Boise, Idaho.

Alex, a normal teenager struggling to get out of the shadow of his basketball-star big brother, is finally finding his own identity. With the help of his best friend, Jake, he makes the high school basketball team and is dating a cheerleader. But the two boys and Alex’s mother, Chris, share a horrific secret: They’re being harassed by a demon that resembles Jeff, a kid Alex grew up with, who moved away years before.

The demon, called Anzu, is visible only to the trio and enjoys verbally abusing them. The harassment is slowly escalating: Anzu throws a stone through Chris’ kitchen windowpane and manipulates Alex’s girlfriend’s memory. As Chris and the boys slowly figure out the connection between Anzu and Jeff, who now lives more than 100 miles away, they begin to understand that the assault could have apocalyptic repercussions.

Although Lambert nails the 1970s atmospherics with vivid descriptions and references to popular bands of the era, the book suffers several flaws. Foremost are the plethora of grammatical errors that distract readers from the story. Lack of editing is also an issue, with frequent repetition. For example, Alex’s father talks about playing intramural and pick-up basketball in college on one page, then says the same thing a few paragraphs later. A generous trim would have radically improved the pacing and readability.

Additionally, the audience for the story is unclear. If it’s marketed as a thriller, tension is conspicuously absent. If it’s sold as horror, those elements are also weak. Is it YA or adult? The tone points to YA, but it’s uncertain if that’s the author’s intention.

Despite the valiant attempts at atmosphere, with so many errors throughout and an indeterminate audience, the story is unlikely to find a wide readership.