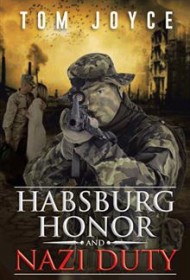 This novel is a character study of Karl Marbach, a police inspector in 1938 Vienna, just after the Nazi annexation of Austria.

Marbach draws his moral code from the House of Habsburg, which ruled Europe for centuries — a code that infuses him with a strong sense of honor. He prides himself on being a man of reason, not emotion.

As a policeman, Marbach is now part of the SS, but he detests the Nazis and their thuggery. He tries not to think about the daily retreats from honor he makes to get along in the new Vienna, and he worries about his job, his wife and daughter, and particularly his mistress, an actress whose passionate hatred for the Nazis is certain to put her in danger.

When a young woman is murdered and the official line is “No crime was committed here, just the death of a Yid whore,” Marbach resorts to dishonorable methods to save a second young woman from a thrill-killer Nazi army officer. And after a close friend is murdered because he’s a gypsy, Marbach vows to quit his post. But soon death comes to his own doorstop, and his rational house of cards comes crashing down as he devolves into vigilante rage.

Author Tom Joyce knows his police procedure. And he knows Vienna. Daily life just after the Anschluss, if not vividly described, is realistically represented; the author has obviously done his research. The story itself, a dark tale of “a good person becoming a howling dog,” has much appeal.

But writing issues impede overall engagement. Many scenes could be shortened (Chapter Eleven, for example, drags out the preliminary to an interrogation of an officer for ten pages). The narrative also features unneeded repetition (i.e. “look of torment” appears three times in one paragraph), and while the prose is serviceable, it doesn’t rise to a higher level.

As a result, the story falls short of its potential. It delivers a reasonably compelling read, but with further polish it could have been far more memorable.