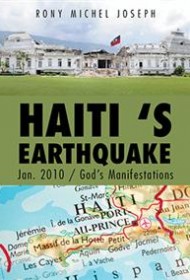 Rony Michel Joseph’s poetry collection, Haiti’s Earthquake: Jan. 2010 /God’s Manifestations, can be likened to naïve painter Grandma Moses. Similar to her technique, his writing style is forthright, simple and functions as a gloss.

Hundreds of thousands of lives were lost and homes annihilated in the earthquake that befell Haiti in January of 2010. Joseph is groping to find spiritual revelation and elucidation in the midst of the devastation and catastrophe and does his best to put a positive spin on what has happened. Although the author’s facility with English is somewhat unsophisticated, he makes a good faith effort to reach readers, as best he can.

The book’s introduction discusses, in poetry form, why the author has chosen the format he has. Each poem (mostly written in capital letters) works in tandem with an informal photograph. The photobook style, Joseph explains: “Is a new way to catch and hold the human mind.” Pictures take readers inside a clinic, cafeteria or church. They might see a collapsed building, or relevant graffiti on the street. While interesting from an informational standpoint, the photos often lack sharpness and artistic merit.

The text moves between clarity and abstraction, sometimes lacking enough detail to make content comprehensible or coherent. In the poem “HE IS EVER PRESENT,” we read: “CREATION AND HIM ARE ONE WHILE HE SUBMERGES THE CREATION / WHY? BECAUSE LIKE THE CLOCK MAKES TIC-TAC TO RUN THE TIME […]/SO IS OUR LOVE…”

One might describe this book as an extended homily or a series of homilies. It’s not preachy or didactic, however, but comes from a sincere and passionate desire to explicate God’s cosmological reasoning when faith is tested by calamity and despair.

Overall, Haiti’s Earthquake is well intentioned but without the polished craftsmanship of more accomplished photography and poetry books. Still, it could be worth a look for those reflecting on human suffering and searching for a positive outlook in the midst of catastrophic suffering.