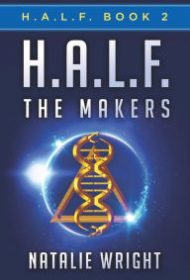 H.A.L.F.: The Makers is the sequel to Natalie Wright’s H.A.L.F.: The Deep Beneath, picking up immediately where its predecessor left off.

In the previous book, teen friends Erika and Ian were abducted by the aliens referred to as the Greys, and separated from Jack, the boy they both love. Jack, in turn, has been imprisoned by shadowy government forces, after the teens stumbled headlong into a secret program to create weaponized human-alien hybrids to help fight an impending interstellar war.

Now Erika and Ian, along with a captured scientist and the hybrid called Tex must together find a way to free themselves from the Greys and return to Earth in hopes of rescuing Jack. In the meantime, Jack’s captor, Commander Lillian Sturgis, finds herself captured and betrayed by some of her own forces. Suddenly free once Sturgis is apprehended, Jack finds an unlikely ally and potential new love interest in Anna, Lillian’s niece. In an unlikely twist, Anna manages to convince Jack that Lillian is not the villain he thought, and together Jack and Anna embark on road trip of action and espionage to free Lillian.

Wright’s writing is fast-paced, with snappy chapters and alternating points of view. Her characters are at times generic, but always likeable, and her portrayal of the Greys, while sketchy, hints at a believable world and culture.

It’s advised that readers first experience Wright’s previous book, as this new one is entirely informed by the events that came before. The themes (alien invasion, government experiments, shadowy conspiracies) are well-trodden territory, but the emphasis on character and action is sufficient to drive readers to the conclusion. Predictably, some things remain unresolved, but in that sense the book has done its most important job: compelling readers to want to see what comes next.