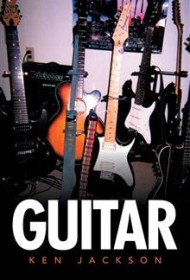 Ken Jackson’s book, Guitar, aims to help readers “study guitar and learn about scales, chords, and the structure of songs,” according to the back cover. It adds, however, that “If you would just like to play guitar, it would be best for you to pay a professional teacher.”

The second sentence is most telling, as the instructional material in this book is often baffling, and a professional teacher is indeed likely to be a needed supplement.

Jackson’s bio notes that he was a musician in high school and, in 1985, recorded with Butch Vig, producer of Nirvana’s Never Mind album. He also served a sentence for an unspecified crime; released in 1999, he then “put out a bunch of rock ‘n’ roll albums.”

The instructional part of the book is contained in seven short chapters (16 pages total).  Chapter titles include “C Scale,” “A Minor Pentatonic Scale” “Shuffle Beat” and “Fake Chords” — an odd array of topics for beginners — and the prose is often puzzling. For example, at the start of his chapter “Power Chords,” Jackson writes: “Major chords, like minor chords, are based on a root. A major third is a root plus a note exactly two steps higher.” Unfortunately, he never tells readers what a “root” is or why it’s important to know about a “major third.”

Ultimately, readers will struggle to make sense of this offering, which, while clearly well intended, falls short of its goal of being a useful tool for aspiring musicians.