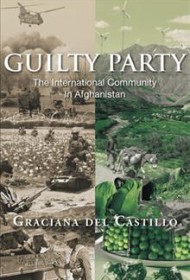 In Guilty Party: The International Community in Afghanistan, Graciana del Castillo, an economic expert on countries in crisis, draws on the complex history of Afghanistan — from the region’s ancient past up until 9/11 — to elucidate America’s failures in its reconstruction efforts, and to offer a regionally-specific alternate plan to rebuild the country’s infrastructure through development of economics of peace.

The book begins with del Castillo detailing her first visit to Afghanistan in 1978, three weeks before the Communist coup d’état. She uses depictions of her travels to illustrate the region’s historical significance as a country that is the product of “foreign conquerors, nationalist policies, international aid, different religions, and the Silk Route linking China and Rome,” and how its inhabitants had no tolerance for foreign occupiers (which she distinguishes from foreign “conquerors”). With these themes, she focuses on the Communist coup, the subsequent Soviet invasion, and the war that raged throughout the nation for decades afterwards — all of which contributed to the economic hardships that led to drug production and weakened governance.

It’s during her second visit to Afghanistan in 2011 that del Castillo observes the “weak, wasteful, and fragmented” attempts at reconstruction. After the toppling of the Taliban following 9/11, she lists several other failures of U.S. occupation, including billions spent on aid that had little effect on security in the country. In order to move towards peace, she stresses the importance of establishing a complete political, security, social, and economic transition that would restore stability and prosperity to a war-torn nation.

Throughout the pages of Guilty Party, del Castillo offers a thorough portrayal of the events leading up to the War in Afghanistan, as well as its aftermath and forthcoming possibilities. Her cohesive, intelligent writing style effortlessly weaves personal anecdotes with exhaustively sourced academic conclusions, making this essential reading for anyone who desires a comprehensive backdrop to modern Afghanistan.