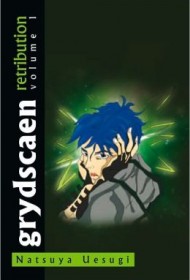 This episodic novel jumps right into the action some time in the future as an underground rebel force with psychic powers called the Packrats uses guerilla warfare against an established military, the Psi faction, comprised of soldiers who also have psychic powers.

Although the author provides a cast of characters at the beginning, grydscaen: retribution would have greatly benefited from a prologue. Readers will be confused about who is fighting whom and by the unfamiliar, futuristic jargon. A short prologue explaining how this future came to pass, how the characters obtained their super powers, exactly why the Packrats are rebelling and so on could have made for a much more enjoyable experience.

Here’s a brief example from early in the novel of how difficult it is to understand what’s happening: “Wraith had also been captured at that time, (sic) he had gotten roped into Psi faction when they ran a conditioning test on him and found out that he was psi capable. The Packrats had gotten into bed with the Terror Hack once the Eite had clamped down on the neurocyne traffic and started their Zone raids for Wastes and illegal wares.” Without some preparation, readers will feel as if they’ve been thrown into a deep pool without ever learning to swim.

Punctuation problems detract from the prose, which is otherwise well written. In addition, while the author excels in fight-scene description, he never motivates readers to choose a side. Those who need someone to root for will eventually find these scenes tedious.

Where Uesugi succeeds is in the structure of the book. The cover makes the book appear to be a graphic novel. Although there are no illustrations inside, the short paragraphs separated by white space act as vignettes that bring to mind the cells on a graphic novel page — an interesting, if unorthodox, approach.