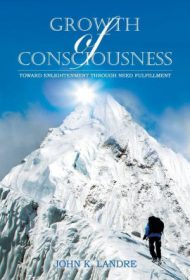 In Growth of Consciousness, John K. Landre posits that awareness evolves by satisfying a continuum of needs driven by our natural motivations. When one need is satisfied, we automatically move up the hierarchy to the next. When all needs are fulfilled (somewhat of a rarity), one reaches the pinnacle: Enlightenment. Here, there is no longer want, discernment or judgment. All is One.

Landre, 93, came to his spiritual work halfway through his career, when he changed his focus from being a successful entrepreneur who designed optical devices to exploring human consciousness. He develops his thesis around the works of the American psychologist and philosopher Abraham Maslow, the psychologist and mystic Carl Jung, the teachings of the Hindu sage Ramesh Blasekar (to whom the book is dedicated), and with contributions from other renowned spiritual leaders and philosophers.

As a scientist who received his master’s degree in physics, the author’s approach to the complexities of consciousness is methodical, and his manuscript is more textbook than self-help (although there are some passages offering self-help-type advice). While Landre explores the five levels of consciousness—instinctual, emotional, rational, intuitive and non-dual—readers are aided by charts and tables. One chart, for example, includes “all known needs,” of which there are 64.

The density of the material often makes Growth of Consciousness difficult going. If readers don’t have a desire or willingness to devote solid chunks of time and serious concentration, the text may become too confusing or overwhelming. Many might abandon the book. The author would have served his readers better if he had simplified his message, rather than making it so abstract.

On the other hand, the work is extraordinary in its scope and in the ways Landre brings psychological reasoning to the spiritual world. Ultimately, Growth of Consciousness is worth the effort. Attentive readers will be enabled to sow their own seeds of consciousness — and hopefully grow from the experience.