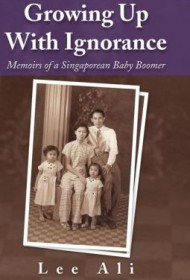 In Growing Up With Ignorance, author Lee Ali balances a clear-eyed recounting of her traumatic childhood with stories of the changing world she grew up in to present a powerful story.

Ali’s parents were illiterate and found work and housing where they could. The Singapore of her early childhood was in the process of separating from British colonial rule. Thus, the vivid tastes, sights and sounds she was used to gradually lost their cultural distinction as the country grew.

Ali’s mother was a tyrant who was abusive and taunted her daughter. “When I turned twelve years old,” Ali writes, “mother decided she could not beat me anymore. But the emotional abuse that followed was much more painful than the physical abuse.” Still, her father loved her, helping her pursue an education by bringing home any discarded paper from his job so that she could do homework on the back. She had a loving relationship with her grandfather, too, and describes sitting in the space under his bed while he smoked opium as a cherished memory.

Clean, uncluttered and straightforward prose allows Ali to be frank about her mother’s cruelty while preserving her mother’s humanity on the page; her mother could be kind to others, despite the way she treated Ali. Ali repeatedly asks but can never answer why this was so.

Growing Up With Ignorance is a hard-hitting story. The format — extra-large font size and space between paragraphs — can interfere with the reading experience. But that’s a minor quibble. Ali leaves the door open for a sequel at the end, and readers who start here will want to know how her life has changed. With this slim volume, she has made us care.