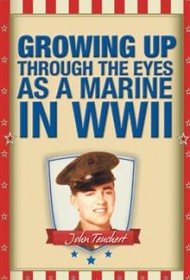 First-hand accounts of wartime service offer an important record of the realities of battle and how these events are viewed by those who were in the thick of it. Growing Up Through the Eyes as a Marine in WWII offers one man’s account of such an experience.

With a narrative of just 40 pages, John Teuchert keeps his story brief, recalling his enlistment in the Marines at age 20 after the bombing of Pearl Harbor. After training, he was sent into battle and seriously wounded in several skirmishes with the Japanese in infamous places such as Tinian and Iwo Jima.

Teuchert offers vivid accounts of the horrors of war, including this passage about fighting at Iwo Jima: “This is when I got my right arm blown to my back and wounded in my right thigh and also jaw. My buddy on my left got part of his jaw almost blown off and he had half his tongue severed in half.”

Despite the effective immediacy of such passages, Teuchert’s writing is scattered and in need of a strong editor for content, as well as grammar and punctuation. This typical passage illustrates the issue: “Well one of our buddies broke into the ships [sic] ice cream locker [sic] then the ships [sic] captain heard of this and we were punished by giving us tooth brushes to clean up the heads, but Saipan now were [sic] getting ready for our next island called Tinian [sic] which is next to Saipan.” It’s possible to extract the overall meaning of such passages, but not without difficulty.

The book includes lists of troop movements, casualty figures and so on in the appendices at the end.

Due to the reading challenges this narrative presents, this book is unlikely to reach a wide readership, but historians may find useful tidbits in Teuchert’s account, and the author has admirably honored his service by recording his experiences for posterity.