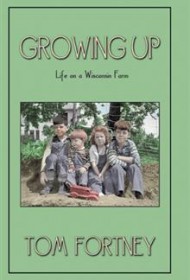 In Growing Up, Tom Fortney recounts a way of life that has mostly vanished, taking readers back to his family’s Wisconsin dairy and tobacco farm in the 1930s and ’40s, when he was a kid.

The book’s 40-plus chapters are short, some only a page or two, each recalling an aspect of that life. Fortney and his three siblings are the main characters, so puppies and cats, 4-H projects, climbing trees and chores all get their due. So do more grownup issues, such as the cycle of life on a farm, country stores and bedbugs. In many cases, there’s a Tom Sawyer-like feel to the kids’ adventures, and sometimes things got even a little more reckless, such as cranking up the family tractor and taking off at 35 miles an hour–all part of growing up or, as the author puts it, “the unmatched thrill of impending death.”

Fortney’s author biography calls him a “storyteller and genealogist,” and his skills in those areas — attention to detail, the ability to produce a clear narrative — are evident. The book has only a few shortcomings: The author provides a good amount of family history, something non-Fortneys might not be interested in. Also, a couple of passages have a little too much detail, such as an extended report on the seating arrangements in various family vehicles, and a too-thorough guide to cutting trees for fence posts.

But by and large, Growing Up is a pleasant, uncomplicated read that would seem to have two obvious audiences. Fortney’s recollections will ring true with anyone who grew up in rural America. Also, they provide a window into Depression-era farm life in the United States, something that a student of those times would find valuable.