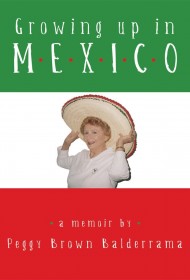 Memoirs usually contain a core — a central fact or set of facts that lends them a narrative arc compelling the reader onward, as if in a novel. Growing Up in Mexico lacks such a center. Written more in the manner of a diary, the book moves from incident to incident without highlighting any above the rest and focusing on nothing specific. Yet despite this lack, the author manages to craft an image of a time and place that rings true.

The time begins on the cusp of World War II, and the place is Mexico, where seven-year-old Peggy Brown and her mother have come from England to join Peggy’s father, an accountant working for various mining companies. Once there, the author embarks on a running summary of her life, from the family’s attempt to raise chickens to the movies she saw, her schooling and first boyfriends. Interspersed are moments that would seem to deserve more import than they are given, such as the death of her father, meeting the man she would marry and their wedding.

Once settled in the city of Torreon, where husband Frank has been assigned as a doctor in the Mexican army, the book becomes part travelogue and part social whirlwind. The author details family trips to Europe, Canada, South America and various places in the U.S. She and her husband meet and entertain Hollywood stars, surrender their house to an overnight visit to the city by the president of Mexico and take up golf, among other developments.

While none of this may be particularly memorable as presented here, and while the book contains a few copy editing oversights, such as referring to hearing “Rosemary Cluny” [sic] sing in Las Vegas or when King Juan Carlos of Spain becomes “King Alfonso,” it is an entertaining record of a life well lived. Unfortunately, to reach a wide audience, it would have to be more than that.