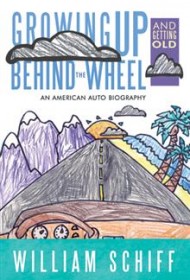 For much of this engaging memoir the author dwells, not on his career as an educator and research psychologist, but on the cars he has owned, driven in, or stolen, and on the memories they evoke. For most of the book, this approach works well, resulting in an entertaining romp through a life lived fully.

Opening to the recalled smells of the family’s 1939 Chrysler sedan on Long Island when he was four, the author embarks on a lengthy road trip through his memory in a variety of vehicles. There are, among many, the Studebaker that takes them all to Florida, the Chevy his father drives through the disintegration of his marriage, and the Cadillac that Schiff and some buddies “borrow” off the street for informal road tests. This last eventually leads to a brief criminal career that, through the auspices of a similarly borrowed Oldsmobile, lands Schiff in the Florida State Prison.

There he is ”saved” by Freud and The Interpretation of Dreams discovered in the prison library, marking the dawn of his professional life. After obtaining an undergraduate degree from the University of Miami (during which he drives a Buick and Chevy) and a PhD from Cornell (English Ford), Schiff starts teaching and doing research at the City College of New York, later at NYU (Dodge, AMC).

Unfortunately, this is where the narrative turns conventional. While the rambling life of this “ex-con psychologist” has thus far been a dizzying ride, filled with surprising twists and turns, once safely on the career track, the road straightens out. Marriage, children, a house in Vermont (VWs, Audis, Subarus), travel and eventual retirement are still filled with adventures, both automotive and otherwise, but what is missing is the sense of the unexpected around the next bend.

Yet enough of the magic of the road lingers to wish Schiff well as he drives his Infinity G37XS into the dusk.