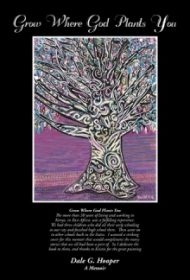 In his memoir Grow Where God Plants You, Baptist missionary Dale G. Hooper highlights his life, including nearly 30 years of ministry in East Africa, to encourage Christians that “God isn’t always looking for a man with ability but availability.”

Growing up on a rocky North Carolina farm during the 1930s meant endless work for Hooper and his ten siblings. Although his childhood lacked celebrations, downtime, affection and luxuries, it equipped him well for missionary life. For 27 years, Hooper travelled and worked in Kenya, Uganda and Tanzania setting up churches and Bible schools, directing community centers, serving as treasurer, businessman, aviator surveyor and even overseeing the creation of a Christian radio program for Voice of Kenya.

Throughout these missions, Hooper refused to allow lack of training, inability or fear to stop him from doing a job. His life story is a refreshing example of what true work ethic looks like and inspires readers to view life’s challenges as growth opportunities.

While Hooper’s admirable qualities shine through by book’s end, a plethora of grammatical errors hinder the book’s effectiveness. In addition, Hooper chose to write in semi-chronological order, but confusion arises as he repeats stories and leaps around in time; for example, inserting a story about his daughter’s death in the middle of his childhood.

Further, readers anticipating stories of God’s miraculous work among native peoples and missionary adventures may be disappointed. While Hooper briefly touches on “church work,” he mainly focuses on nonessential hunting and fishing trips and changing flat tires. He mentions the brutal assassination of his friend Dr. Talbert and offers a few testimonies of faith, but quickly abandons these topics. The book abruptly ends with the feeling that nothing too special happened, which is surely not the case.

Hooper’s book would have benefited from a skilled developmental editor. Nonetheless, it  may interest those studying the history of Baptist missions, and will be cherished by close friends and family.