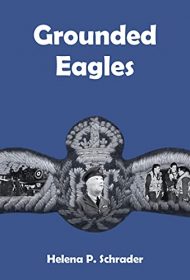 The first story, A Stranger in the Mirror, details the recovery of a pilot who is shot down, resulting in severe burns. While recovering from a complete facial reconstruction, he learns that he will never be able to fly again.

In A Rose in November, the widowed chief of a ground crew for a spit-fire squadron juggles his responsibilities to the RAF, his children and a new romantic interest, a spinster whose higher class and familial relationship with the protagonist’s superior officer complicate their affair.

Finally, in Lack of Moral Fibre, a bomber crew member refuses to fly after a traumatic mission. The story details the young man’s RAF-ordered psychiatric treatment, exploring the nature of courage and cowardice.

Schrader excels at examining the nexus of physical and psychological trauma. For instance, David Goldman, Stranger’s protagonist, must literally and figuratively learn to live with a new identity. Schrader captures the poignancy and complexity of this struggle as David considers the impact his scarred face has on those at the hospital: “It wasn’t his bandaged face that had made the nurse vomit, but what lay underneath.”

In Rose, Schrader simultaneously captures the intricacies of RAF life and the complexities of a romance that challenges the boundaries of class and culture. Protagonist Rhys Jenkins appeals because his struggles to balance work, family and a middle-aged love affair are so relatable.

One drawback of the novellas is that their endings feel somewhat unresolved. For example, David Goldman appears to have found a new sense of self, but having come so far on his compelling journey, readers may be disappointed that it concludes before observing how the “new” David Goldman navigates the world.

Grounded Eagles will appeal to any fan of WWII fiction. Given their somewhat unfinished quality, however, these novellas might benefit from being expanded into novels.