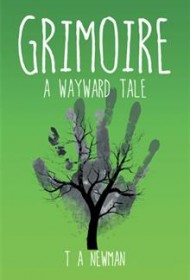 At Smoke and Mirrors, Wayward traffics in occult and magical collectibles but leads rather a quiet existence. That changes when lovely Emilia arrives on his doorstep asking for help. Emilia commissions Wayward to track down the missing cards in a tarot deck. For payment in advance, she gives him his lost family “grimoire,” a powerful book of spells.

As Wayward tries to master the family magic, he encounters a variety of quirky characters, from a kindly procurer of magical objects to a dandyish alchemist to a descendent of vampire hunter Abraham Van Helsing. Then there are the lizardlike Lamiacs, with their melting features and appetites for destruction.

Wayward and Emilia, it turns out, are not the only ones interested in the missing tarot cards. Wayward’s quest takes him to the Museum of Unnatural History and the Halls of Knowledge, where he learns of his ancestors’ role in an ancient struggle for control of the world’s magic.

Wayward is an immensely appealing protagonist, and Newman generally succeeds in crafting a spirited, witty narrative voice for him. But occasionally that voice sounds strained and overwritten, as in this passage describing Wayward’s “dream or nightmare”: “In no small part due to the ice-cold ink trying to consume me, I felt like I was going into shock and found it harder and harder to catch my breath like an asthmatic in a vacuum.”

Although the breakneck pace of the story is generally satisfying, the many revelations and counter-revelations in the novel’s last few chapters grow a bit tiring.

These flaws are fairly minor, however, compared to the novel’s virtues. Grimoire should please fans of comic urban fantasy and leave them looking forward to Jon Wayward’s further adventures.