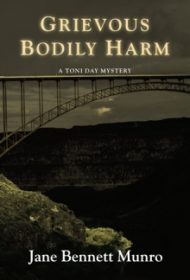 An evil hospital administrator meets his match when he takes on feisty Idaho pathologist Toni Day in this welcome fourth outing in the series by semiretired pathologist Dr. Jane Bennett Munro (Death by Autopsy, 2014, etc.).

In this outing, Mormon hospital administrator Marcus Manning invades Day’s amicable workplace. A Grade A SOB, Manning sweeps into the struggling Perrine Memorial Hospital in Twin Falls, Idaho, with ambitions of taking over the entire operation—at all costs. His first slimy move is to threaten to fire Day, and then to immediately sexually harass her, followed by another oily move on one of Day’s colleagues. As they say these days, believe the women. “In short, I was damned if I did and damned if I didn’t, and I would be damned if I was just going to sit back and let it happen,” says our rebellious heroine.

What follows is a portrait of misogyny, abuse of power and cruelty that’s almost too much to bear. Manning is not only a power-mad narcissist, but also a blackmailer and wife-beater who crushes Toni’s arms in their most dramatic encounter, after which she’s rushed into surgery.

When Manning drops dead of cyanide poisoning at a hospital picnic, the suspects include Manning’s wife; a blonde femme fatale new to the hospital; several of Toni’s colleagues, and of course, Toni herself. While other characters in this ensemble often earn only serviceable portrayals, and Manning’s actions sometimes seem over-the-top, Toni’s grit pitted against his casual malice makes for entertaining sport, all penned in confident, mostly plausible strokes.

Munro has plotted a rich whodunit with character reveals and plot reversals worthy of Agatha Christie, all in service of a plot steeped in Toni’s medical lore. More sensitive readers might use caution—Manning’s autopsy is particularly shocking—but mystery fans will race to the book’s propulsive, violent ending on one of Idaho’s picturesque rivers.