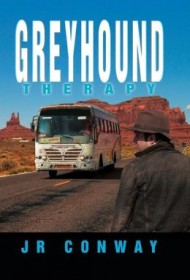 If public transportation is the chariot of the people, many of its patrons aren’t behaving regally. J R Conway’s novel Greyhound Therapy imagines a worst-case scenario that throws a small town into chaos.

Conway has worked in law enforcement and traveled enough to know that those caught misbehaving on the bus are offloaded at the nearest sheriff’s office. When a pair of such scufflers in this story turn up in Rock Springs, Wyoming, it’s just a typical annoyance for officers, until one of the detainees kills the other, then escapes from his cell. Now the town is on high alert, and law enforcement must think several moves ahead to bring down Albert Brown.

Greyhound Therapy juggles several story lines—an officer’s wife is diagnosed with cancer, an incoherent woman is picked up and transferred to the hospital—and there are several flashbacks that spring up jarringly in the middle of scenes. These diversions distract from the story. With a book that clocks in at a mere 139 pages, so many plot threads make for an overwhelming read. That said, expanding the story could easily accommodate all these diversions.

Conway has a facility with small, character-driven scenes: “It was rush hour in Green River, and several cars had blown their horns in greeting. Each time, Craig would wave, recognizing no one, just waving so that people wouldn’t think their hello had been wasted.” There’s also a well-plotted showdown at the end of the story, with vivid visual description of the scene and players.

While this novel requires further work to flesh out the story, Conway clearly has chops as a suspense novelist. Despite its flaws, Greyhound Therapy is ambitious and bold, and ultimately, the author shows great promise.