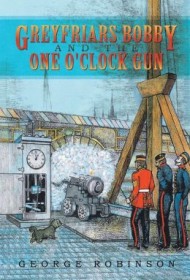 Greyfriar’s Bobby and the One O’Clock Gun is a charming work of historical fiction that will move children and adults alike. This short book of vignettes revolves around a stray Skye terrier and the Edinburgh neighborhood that took him in, but it’s also an engaging portrait of Scotland in the late 19th century.

Greyfriar’s Bobby was a real dog, and the One O’Clock Gun of the title a real technology, a cannon used to signal the hour and help regulate shipping on the fjord, Firth of Forth. Bobby cadges free meals from area restaurants, but he also follows Colour Sergeant Scott on his errands (including tests of the gun) and occasionally makes himself a minor hero, finding a young girl lost in a crowd, for example, and a survivor in the rubble of a collapsed building.

Author George Robinson researched Bobby’s story and the history of Edinburgh, and his book, complete with lovely engravings, cries out to be read aloud to children. Passages written in Scottish brogue will be especially fun to sound out. “I dinnae ken what I would have done if you and Bobby hadnae come along. The theiving scoundrels were trying tae rob me!”

The history is engaging — there’s a tragic tenement collapse, an animal rights protest as horse-drawn trams appear in town, and Bobby’s legacy and memorial fountain — and while these things are somber, the mood never bogs down. The little dog becomes a sort of community mascot and his charm wins us over as well.

Greyfriar’s Bobby is a slender volume, but its crisp prose and beautiful art make it a winner.