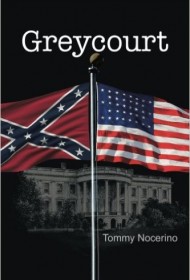 This complicated but very readable historical novel takes readers back to a challenging and transformative moment in America’s past.

The story opens in the basement of the White House (then called the President’s House) in the last days of the Civil War.  Allan Pinkerton, chief of the Secret Service, is questioning a supposed Confederate spy about to be hanged for trying to blow up both President Lincoln and General Grant. But first he wants to hear the prisoner’s story.

It’s quite a story. Told in flashback and mixed with scenes of Pinkerton’s interrogation, Colt Greycourt spins out a tale that begins with his heroic service battling the Yankee invader but soon turns murky.  Rejected and routinely humiliated by his own father (who turns out to be a war profiteer, more interested in his own cause than the Southern one), he is eventually forced to confront the issue of slavery, which nearly gets him hung by a rival officer in the rebel ranks and forces him to flee north where he is soon recruited as an agent protecting the President against a whole host of plots.

And they turn out to be not just those trying to bring down the president.  There are spies galore, machinations to lengthen the war for private gain and betrayals, one of which comes uncomfortably close to Colt himself. A recurring group of villains keeps the narrative churning.

This is a well-told tale, filled with fully drawn characters who confront a believable series of crises. The historical aspects are woven into the narrative with skill and ring true to life. But what finally makes the plot both suspenseful and engaging is what we as readers know and what the characters (of course) do not: The interrogation in the basement of the President’s House takes place just scant hours before the assassination of Abraham Lincoln. The building tension should keep readers involved right up to the solid and well-delivered conclusion.