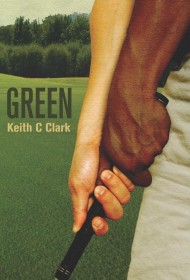 When two high school teens connect over golf, the friendship is instant, but in this 1969 environment of rampant racism, the relationship is fated to end almost as quickly as it begins in this compelling novel titled Green.

Aloysius “Wish” Fitzgerald is a 17-year-old caddie at the Wee Burn Country Club in an upscale Connecticut suburb when he meets Jackson Spears. They are different in every way. Fitzgerald is a tall, handsome African American with natural athletic ability. He is the son of a single mom, and both work hard to make ends meet. Spears is short, chubby and undermined by a lack of confidence. He is also a rich, white kid who wants for little in the material world. When the two pair up on the golf course, Fitzgerald’s good nature helps Jackson relax, and that in turn improves his game. And so the friendship is born. But when the elder Spears gets wind of it, he ensures the friendship must end.

For Fitzgerald, this becomes a defining moment in his life, leading him to harbor a deep and abiding dislike for white people. And years later, when Spears tracks him down, hoping to explain things and rekindle the friendship, Fitzgerald will have nothing to do with him. But Fitzgerald has a dream of playing in the PGA and to obtain it, he’ll need help. If he won’t ask for it, little does he know, others will.

This is a lovely story of friendship and dreams, of disappointment and triumph. Clark is a natural storyteller with in-depth knowledge of the golf world that lends the story credence and adds layers to the tale. His style feels effortless, the storyline seamless. The characters are people we might easily know, perfectly imperfect as they attempt to cope with life’s many challenges and rewards. Golf fans will almost certainly enjoy the read, but so too will anyone who enjoys a story of friendship, hope and perseverance.