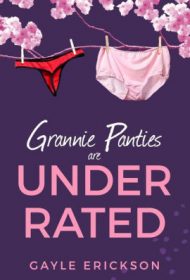 From its unusual title to its time-and-place-shifting narrative, Gayle Erickson’s Grannie Panties Are Underrated is chockfull of unexpected juxtapositions and surprising twists.

The novel opens with a flashback to 1994, when the story’s protagonist, Elle, finds herself sick from a night of drinking and drugging. She’s been living in Tokyo for two years and is in a relationship with a Japanese man who later turns out to be a low-level gangster. We learn that she’s in deep trouble.

The story then jumps to the present, with Elle now part of high society. She’s dissatisfied with her life of luxury and troubled by feelings of regret for her youthful past and doubts about being a good wife and mother.

Like a tennis volley in one of Elle’s country club tournaments, the story bounces between her Japan days and the present. The back-and-forth recalls, by turns, the youthful foolishness of Bright Lights, Big City and the artificially stoic decay of The Great Gatsby. The Tokyo scenes accurately capture the culture of the city—a 24/7 playground for young people with its sensory overload. And the present-day scenes establish the emptiness of adult Elle’s routine. As the novel evolves, the Japanese side of the story careens into tragedy, with Elle’s lifestyle growing increasingly out of control. Not surprisingly, the past and present collide at book’s end.

Erickson’s prose is crisp, fueled by engaging, believable dialogue and vivid imagery, such as when she returns to Japan: “The neon signs, the noise, the people, all of them were reassuring in their familiarity and Elle felt a comfortable ease—like finding her favorite pair of Levi 501 jeans from high school still fit.”

The ending, unfortunately, feels rushed and leaves readers hanging. Ultimately, we know Elle will redeem herself and resolve her issues, but it would be more satisfying if Erickson spelled it out for us.

Nonetheless, the book is an entertaining read, one that should appeal to a wide audience.