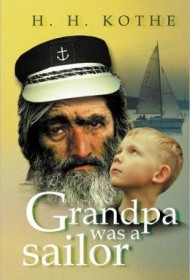 H.H. Kothe has one heckuva small-town-boy-does-good story, and he tells it with skill in his memoir, Grandpa Was a Sailor.

Born in 1933 in rural North Dakota, Kothe stumbled onto an application for the U.S. Coast Guard and earned an appointment to the prestigious Coast Guard Academy. He did not intend to live an “uninspired existence,” and this swift and sure memoir proves he did not.

Informative and reflective, full of tidbits such as how to navigate rough seas in the Bering Straits and keep 100 men on a ship in line, Grandpa was a Sailor charts Kothe’s life chronologically, each chapter covering a different period in his Coast Guard career.

On his first, week-long trip aboard the Academy’s tall sailing ship Eagle, Kothe lost 15 pounds due to seasickness. Thirty-five eventful years later – including investigating the wreck of the Edmund Fitzgerald — Kothe was captain of the icecutter Polar Sea, busting through ice 6 ½-feet thick at both of the earth’s poles. “There’s nothing quite like having a 350 million dollar seagoing bumper car to play with,” he writes with typical dry wit.

The stories are a terrific primer on ships without being full of jargon (though the reader would benefit from a glossary and some diagrams). Each chapter offers a satisfying balance of facts, observations about people and places, and the realities of the demanding career. His son Paul was born while he was at sea, and he writes succinctly: “Not home for important events.”

It’s hard to understand the title of the book, given the sadly few references to his family, and the corny cover clip art of a young boy looking up to the face of a wizened sailor is painfully misleading. It also would have been nice had this talented writer found a thread to tie all the stories together. But even so, Kothe’s “inspired existence” makes great reading for all us landlubbers.