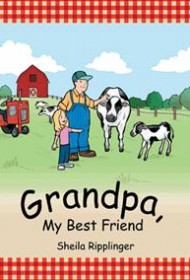 Cherished memories often serve as inspiration for picture books. This is the case for Sheila Ripplinger in her nonfiction account of time spent with her beloved grandfather, a farmer who, according to the book’s back cover, endowed her with “memories of precious quality time.”

Ripplinger uses the first-person point of view and offers an opening two-page spread of family snapshots, underlining the fact that this book has personal meaning for her. After the photos, she begins to detail activities undertaken with Grandpa, including helping with farm chores, going fishing, attending church and riding on a red tractor.

“My grandparents were always busy,” she writes. “They started the day by milking the cows. They fed them hay and grain…When the morning milking was done, grandpa [sic] would load up the full cans of milk into the back of his farm truck. I would ride along beside him as he hauled the milk cans to the local creamery.”

Such recollections, while interesting for youngsters unfamiliar with this world, come across as somewhat generic, with sensations and emotions stated rather than evoked. For instance, Ripplinger recalls, “Grandma was a very good cook! Everything always tasted so delicious!” The author offers a more evocative memory when she recalls Sundays at her grandparents’ church: “My heart was so happy as they sang the old hymns to the music of an organ that the preacher’s wife played so faithfully.”

The book’s illustrations can feel as generic as the narrative, and the text includes a handful of copyediting errors and a word or two that may require explanation, such as “stanchions.”

Still, for those children who have never been on a farm, Ripplinger offers an instructive peek behind the scenes, wrapped in an amiable narration about the special relationship between a girl and her Grandpa.