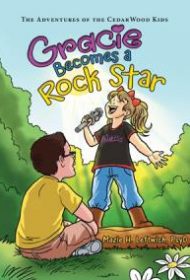 Leftwich captures an afternoon on CedarWood farm where three generations of the family are gathered for a barbeque. The story is told from the perspective of Caden, “the oldest of the CedarWood Kids.”

After Gracie and Caden tire of “all the grown-up talking” at the family picnic, they climb on a parked Bobcat, and then Gracie spies a “pile of big, flat rocks.” She chooses one for a stage and, using a “small piece of pipe” for a microphone, belts out a “made-up” tune and other songs more familiar to the family. When she’s done, Caden realizes “it was a special moment for our family but an even bigger, special moment for Gracie,” who has realized her dream of becoming a “ROCK STAR!”

Leftwich’s prose is realistic, age appropriate, and accessible to younger readers. Although the pictures seem rather generic, they advance the story arc in a straightforward manner, accurately illustrating Caden’s narrative.

While told in a lively manner, the narrative lacks plot development. Set over the course of an afternoon, the story’s only real action is Gracie’s performance. Caden claims the performance was a “special moment for Gracie,” but Gracie faces no major obstacles before or during her performance. As a result, the story lacks page-turning tension.

It’s also unclear what message is being conveyed. Possibly, Leftwich intends to highlight the values of patience, attention and family support (Caden realizes he enjoys the performance even though at first he professes boredom), but this is not clearly relayed.

Additionally, some adults may object to Caden’s stereotypical characterization of his sister. He describes her as “ALL girl. [Because] She loves having bows in her hair and dressing up pretty.”

Gracie Becomes a Rock Star would be greatly improved with attention to such issues. Still, some children may enjoy the idea of a young girl boldly and confidently entertaining her family.