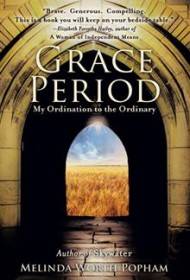 Grace Period is a skillfully written, inspiring story of spiritual growth that recalls the writings of Anne Lamott, with its openness about the raw vulnerabilities of motherhood and Elizabeth Gilbert’s Eat, Pray, Love with its honest and searing search for a higher purpose in life.

Melinda Worth Popham was a privileged, middle-aged Malibu writer when her young daughter developed debilitating depression. At the same time, Popham was divorcing her emotionally distant husband. Thus destabilized, this intellectual with “spiritual inklings” signed up for a Centering Prayer Workshop, “so nervous and excited you’d think I agreed to go on a blind date with God.”

The meditation activated her awareness of the divine and, to fan that spark, she impulsively decided to trek east to attend Yale Divinity School (motto: “Faith and Intellect”) without a goal in mind. As she relates her story of loneliness and learning, this Buddhist-leaning Episcopalian shares Bible passages sparingly and delightfully references Jung, Gilgamesh, Dante and Ram Dass, among others.

Her stories—such as her admission of anxious parental over-protectiveness, and a confession that she rewarded herself with wine when she completed New Testament flashcards—endear her, while her insightful turns of phrase send us reaching repeatedly for the highlighter.

The narrative momentum slows slightly about halfway through, with a couple of self-contained stories (one chapter about a troubled child with whom Popham volunteered for several years, and another relating the disturbing day when Popham’s dark “shadow self” allowed her to verbally savage a dog walker whose pet was off-leash). But she picks up the threads of her studies— and the relationship with her daughter we are rooting for—and leaves us with a satisfying ending when she is settled back home in California.

Ultimately, this is a wise, honest, satisfying memoir. Anyone who has suffered, or lives with a modicum of spiritual curiosity, will relate to Popham’s experience and want to press this book into the hands of a friend (or 12).