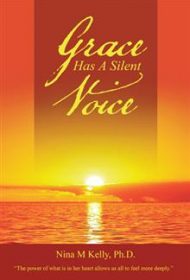 Nina M. Kelly notes in her Preface that the goal of Grace Has A Silent Voice is “to express my thoughts concerning the voice of grace that speaks through so many lives…In each of these stories, people rise to the occasion without hesitation. Subsequently, they offer this charitable gift of grace.”  What follows are stories reflecting scenes from her life, including two that describe the gift of life paid forward by an organ donor. (Kelly has worked as an organ procurement specialist).

The book takes the form of letters to a friend, although entries read more like essays. In one, she writes about living in New Orleans during Hurricane Katrina. After trying to commission a helicopter to lift her out of the Superdome parking lot, she decides to drive, despite questionable road conditions, giving a man a ride in exchange for directions through parts of the city he knows well. Eventually, she finds her way to safety.

In another, she relates the story of a homeless man she met and eventually hired to wash her car. One day she gives him the keys and asks him to leave the car in her home garage. Her friends are appalled, but he gets it done.

The writing often lacks focus and is, unfortunately, heavy with dropped words, minor errors and balky sentences such as: “Ms. Argerich, after learning about her own journey contending with cancer, I wonder if Frank felt the connection to her on another level.” In a story about a race against the clock to get organs to a recipient in a New York City blizzard, she writes, “Then, on the side of my eye I noticed a Port Authority policeman.” Such errors are distracting and sometimes obscure her meaning.

Grace Has A Silent Voice may speak to people affected by organ transplants and those who have weathered life’s metaphorical storms, but it needs meticulous proofreading and editing before it can attract an enthusiastic audience.