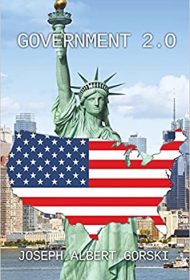 “Governments around the world are going broke with debt. The credit card is almost maxed out,” declares author Joseph Albert Gorski in his Government 2.0. He believes that a major cause of these woes is “fiat money,” the government monopoly on currency that allows it to print money at will, untethered by a gold standard or any objective touchstone.

Gorski holds that “the ability of central banks to prop up an economy choked by government policies and taxes no longer works very well even with virtually zero interest rates.” To respond to this challenge, he calls for a reform known as the Prime Law that would put an end to “legal initiatory force, threat of force, fraud, or coercion by government.” Then, he would eliminate income taxes and privatize Social Security.

In his view, a combination of technologies – the Internet, biotech, and 3-D printing – will revolutionize healthcare, education, and media, absent government intervention. The combination of a tech revolution and the retreat of Big Government would, claims the author, usher in a virtual utopia, leading to prosperity, better healthcare, and an end to war and racism.

Gorski’s diagnosis of the ills and risks of our current governmental and monetary institutions is astute and intriguing. His writing is straightforward and clear (although with some punctuation errors).

However, his cure for the problem he explores, and the prognosis he offers for that cure, are speculative at best. Ills such as war and poverty predate bureaucratic government and fiat money. Since they cannot be laid at the feet of Big Government alone, the notion that defanging such governments would create an earthly paradise is highly debatable. Readers will also find the last chapters of the book, where he describes his utopia, repetitive.

The audience for this book includes committed Libertarians and Anarcho-Capitalists looking for a quick read to lend to their friends to spread their message. Gorski’s treatment is unlikely to convince those not already in his camp.