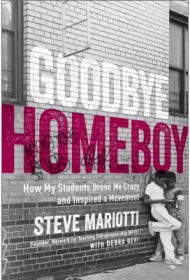 Steve Mariotti’s Goodbye Homeboy is the first-person account of a former financial whiz kid who chose to work for decades in the trenches of New York City’s roughest schools. What he learned there dramatically changed his life and those of his students.

After a gang of New York City teens robbed Mariotti in 1981, he was plagued by debilitating nightmares and flashbacks. Determined to understand what drove the kids who jumped him, he took his therapist’s advice to “face his fears” literally, closing his import-export business and volunteering to work in notoriously rough high schools in impoverished neighborhoods. His students were remedial learners, special ed kids and those with discipline problems.

In the beginning, the author’s classes were chaos, but while teaching remedial math, Mariotti devised the idea of imparting entrepreneurial business skills. He gradually discovered his rowdy kids would settle down when learning about how to make money. In fact, the stress of their lives made them natural entrepreneurs: “They were comfortable with risk and ambiguity. They were gutsy…and natural salespeople,” writes Mariotti. Learning how to earn made students eager to conquer math skills, and eventually, the author developed games and strategies for learning.

His students’ lives are riveting. Readers will be swept up in the suspense of whether individual kids will make it—those like Tawana, a third-generation welfare recipient who was inspired to start a manicure business, or Victor, a smart-mouth drug dealer who once brought $18,000 to school; when thugs threatened to kill Mariotti if Victor didn’t pay them, Victor revealed his stash to the robbers, saving Mariotti’s life.

In 1987, Mariotti’s unique teaching method led him to found Network for Teaching Entrepreneurship (NFTE), a national multi-million-dollar nonprofit that teaches low-income kids entrepreneurial skills. The success stories are innumerable, but the deaths of 14 NFTE students remind readers of the challenges involved.

This is an important, compelling story. Readers interested in the reality of extreme poverty and violence will find it well written, terrifying, and finally uplifting.